The United States has always had friendly relations with Republic of Maldives, and an interest in seeing the country reach its potential.  Since 2001, the U.S. Agency for International Development (USAID) has assisted Maldives to utilize the potential of wind to meet their energy needs.

Successful execution of these projects may lead to further USAID development initiatives from the American people. 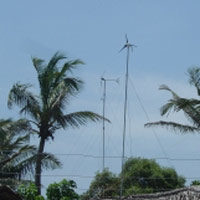 Like many countries, Maldives faces the challenge of a secure energy supply limited by sparse indigenous energy resources and high dependence on imported oil.  With the construction of energy-intensive, high-rise buildings and growing ownership of household and commercial electrical appliances, the demand for commercial energy has been increasing steadily in recent years.

The state electric company provides 24-hour electricity to the capital Male’, while all other inhabited islands have access to electricity through small diesel generating sets managed by private operators. For the near-80 islands developed for tourism, diesel remains the main source of power generation. Few renewable energy sources have yet to be introduced to help the country meet a part of their energy needs. 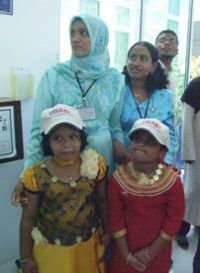 In response, the U.S. Congress allocated $12 million for relief and reconstruction assistance for Maldives.  U.S. relief activities worth $1.3 million were concluded within the six months following the tsunami.

The United States also granted $8.6 million for construction of a harbor and breakwater, upgrading of sewage systems, repair of power systems, and assistance to the Ministry of Finance to improve its public accounting systems.

The following are details of the United States’ long term reconstruction assistance:

The Republic of Maldives depends on rainwater harvesting and groundwater during the dry season as the sources of safe drinking water to sustain its population. Preservation of its water resources and management of sanitation services is a main concern for the country and any disruption of groundwater capabilities leaves the population vulnerable.

The program installed water desalination plants with 30,000 liters per day capacity at both islands, formed water management committees, built local capacity, and provided media equipment to facilitate advisory services on water hygiene and environmental health at the Atoll Hospital.  The program also improved capacity for waste water and sewage sector planning and assisted with project management and implementation with the Ministry.  A subcontract for the construction of water systems was executed in July 2007.

The project was managed by the American firm, CH2M Hill, with a contractor field office in Maldives.   The project also provided training to the Ministry of Environment, Energy & Water.

An $8.6 million grant to Maldives, to be administered by the Ministry of Foreign Affairs, Department of External Resources, will fund construction of a harbor and breakwater, upgrading of sewage systems, repair of power systems, and assistance to the Ministry of Finance to strengthen its public accounting systems.

One harbor project will be for a newly inhabited island, R. Dhuvafaruu, where the International Federation of the Red Cross is assisting with relocation of a community whose island was rendered uninhabitable by the tsunami.

The destruction of sewerage systems on inhabited islands led to additional groundwater contamination and is perhaps the major post-tsunami infrastructure challenge faced by the Maldives.  New sewage systems on four islands will handle higher capacity and will evacuate waste farther from the shoreline, into deeper water where it will be more rapidly dissipated.

Electricity systems on six islands will be upgraded with larger capacity generators and new electrical wiring to replace cables and switches damaged by the salt water. 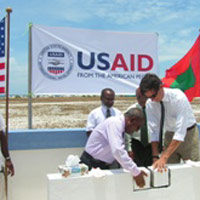 Ambassador of the United States of America to Maldives and Sri Lanka, Robert Blake, joined with Lhaviyani Atoll Chief Ahmed Moosa and local officials to preside over the groundbreaking of the U.S. Agency for International Development’s (USAID) Lhaviyani Atoll Community Water Supply Project on Hinnavaru and Naifaru islands on Wednesday August 29, 2007.

Under the project developed after the 2004 tsunami, USAID is installing water desalination plants with 30,000 liters per day capacity on both Naifaru and Hinnavaru, and will assist in the formation of water management committees.

The $1.9 million initiative also includes institutional strengthening and capacity building in the Ministry of Environment, Energy & Water.  It is managed by the American firm, CH2M Hill.  Through this project, the American people are contributing to the development of a secure water supply system on two of the largest islands in Maldives.