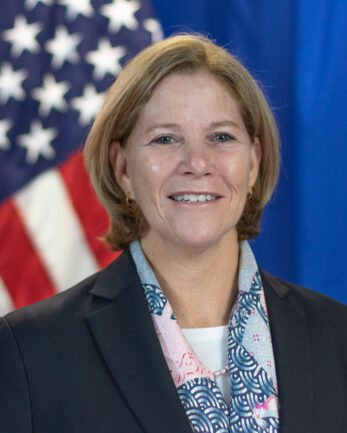 Ms. Andrea Appell is Chargé d’Affaires of the U.S. Mission to Maldives having joined the U.S. Department of State in 2005.

Previously, Ms. Appell served as Foreign Policy Advisor (POLAD) for the U.S. Marine Corps Forces, Pacific, in Hawaii; Director of the New York Program Branch in the Office of International Visitors with the Bureau of Educational and Cultural Affairs; and Public Affairs Officer for the U.S. Mission to the Association of Southeast Asian Nations (USASEAN) in Jakarta, Indonesia.  She also served in Riyadh, Canberra, Baghdad, Tunis, and Casablanca.

A native of Los Angeles, California, Ms. Appell received her bachelor’s degree from the University of Arizona and a master’s degree in Political Science with a specialization in Public Administration from Illinois State University, where she was a Peace Corps Fellow following service as a Peace Corps Volunteer in Kyiv, Ukraine.