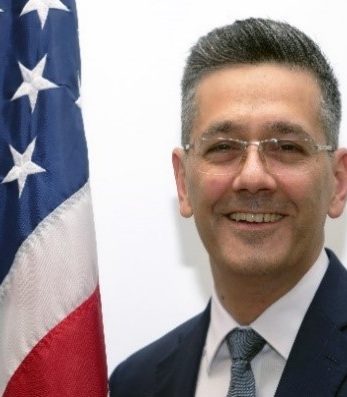 Martin Kelly is a Career Member of the Senior Foreign Service who took up his duties as Deputy Chief of Mission at the U.S. Embassy in Colombo in August 2019. In that capacity, he supports the Ambassador’s policy engagement with Sri Lanka and Maldives, including the Indo-Pacific strategy, and runs the internal operations of an Embassy with 500 employees. Martin previously served as Deputy Consul General at the U.S. Consulate General in Dubai (2016-2019) where he supported our expanding relationship with the United Arab Emirates and promoted U.S. trade and counter-proliferation goals.

Throughout his career, Mr. Kelly has worked in a broad range of assignments with a focus on South Asia and the Middle East. He served as Management Counselor in Jerusalem (2012-2016) where he led our effort to acquire a 17-acre, $86 million diplomatic compound and negotiated a bilateral tax agreement with the Government of Israel. He worked in Kabul (2011 to 2012), managing the Field Support Unit and Embassy aviation operations, and in the Bureau of South and Central Asian Affairs (2009-2011) supporting our missions in Afghanistan and Pakistan.

Earlier in his career, Mr. Kelly served in various positions in Mumbai (1999-2001), Milan (2002- 2004), Moscow (2004-2006) and Sydney (2006-2009), and he has received several Superior Honor and Meritorious Service awards. He earned a B.A. in Politics and Russian studies from Princeton University and an M.A. in International Policy Studies from the Monterey Institute, and speaks Russian and Italian. Martin is married to Neena Kelly and they are the proud parents of Aidan, a middle-schooler.