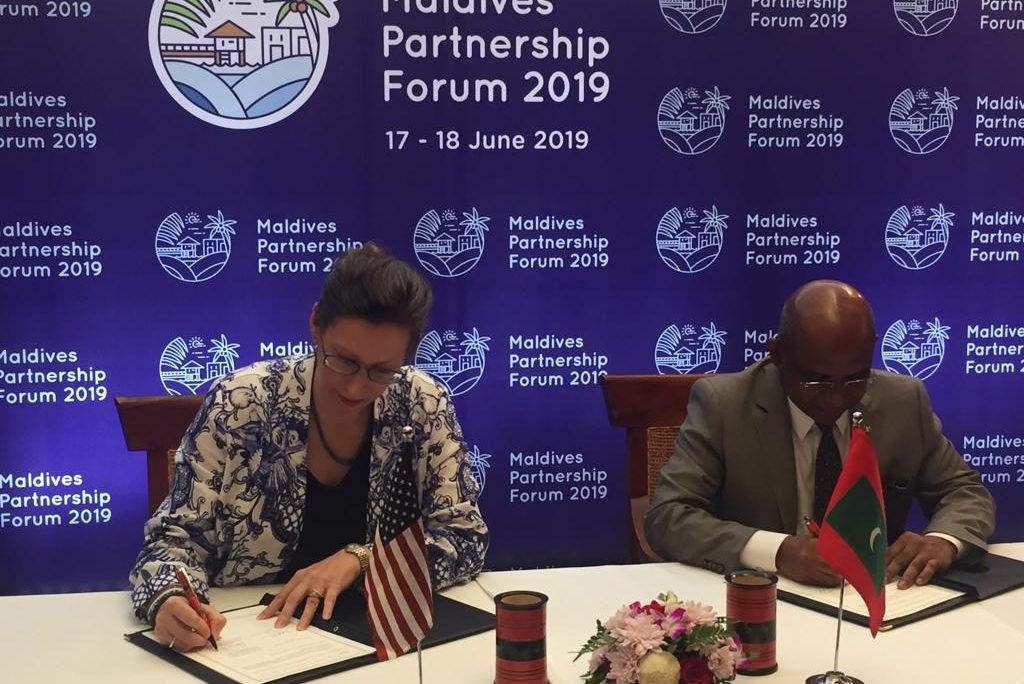 June 19, Malé:  The United States is proud of our robust and growing relationship with Maldives and of our expanding bilateral cooperation in ensuring greater security and prosperity in the Indian Ocean.  We remain fully committed to supporting Maldivian initiatives to strengthen democracy, improve governance, root out corruption, enhance security, promote economic development, and protect the environment.

U.S. Ambassador to Maldives Alaina B. Teplitz led a delegation to participate in the Partnership Forum held in Male June 16-18.  Following the Partnership Forum, she is meeting with Maldivian Government and non-governmental partners to discuss the spectrum of issues upon which our collaboration is growing.

While in country, the Ambassador will attend the closing ceremony of the U.S. Indo-Pacific Command (INDOPACOM) led Medical Outreach Program at Veymandhoo Island. This week-long training conducted with the Maldives National Defence Force, local civilian first responders, medical staff, and doctors aimed to help increase inter-operability between medical first responders in the greater Thaa Atoll and bolster disaster readiness capabilities in Maldives.  Personnel from the Civil Military Support Element from Fort Bragg in North Carolina and the U.S. Embassy in Colombo have regularly conducted medical training with Maldives since the Maldivian Emergency Medical Exercise was launched in 2016.  The United States continues to work alongside its partner nations to increase interoperability, build partner capacity, prevent conflict, and promote peace.

Ambassador Teplitz also oversaw a signing ceremony marking the newest amendment to the Development Objective Grant Agreement (DOAG).  The DOAG is the bilateral development agreement signed between the United States and Maldives in March 2019, with a ceiling of 20 million USD, through which the U.S. Government will provide eight million USD (approximately 124 million Maldivian Rufiyaa) in funding to the Government and the people of the Republic of Maldives.  This funding will improve the resilience of Maldives’ economic and democratic governance and support inclusive and sustainable development.  The funding will be channeled through the U.S. Government’s development agency, the United States Agency for International Development (USAID).  The agreement was signed by USAID Mission Director for Sri Lanka and Maldives Reed Aeschliman and Maldivian Minister of State for Foreign Affairs Ahmed Khaleel. In total, the U.S. Government has mobilized over 22 million USD over the past year towards its development and security partnership with Maldives.

Joining an ongoing series of programs initiated through the American Center Male, Ambassador Teplitz will lead a beach cleanup with Girl Guides Maldives.  These recurring cleanup projects began in 2017 and have gained tremendous support through enthusiastic volunteers, with participants collecting nearly 1,100 kilos of trash with each cleanup project.  The environment is just one area where the American Center is having an impact, it also offers free programs related to civic responsibility, STEM education, empowering those with disabilities and strengthening media.  Ambassador Teplitz also signed a Memorandum of Understanding (MOU) with Maldivian Foreign Minister Abdulla Shahid to formalize the American Center partnership over the coming year.

The visit underscores the ongoing commitment of the United States to strengthening its partnership with Maldives and building lasting people-to-people ties that will benefit both countries and the Indo Pacific region.